Quick Guide to League of Legends

This is a basic overview of how League of Legends is played and the most important elements of the game.

Written by Jonny Hockey
Updated over a week ago

Welcome to the Quick Guide to League of Legends. We will touch on the main elements of the game to give you a basic understanding. If you want to read our full comprehensive guide, you can find it 👉 HERE 👈

What is League of Legends?

League of Legends is a competitive online game where two teams of 5 players battle to destroy the opposing team's Nexus (or base) before their own is destroyed. The game is concluded when a team destroys the opposing Nexus, naming the team winner. Games vary in length; however, the average game time is around 30-40 minutes.

Competitive League of Legends is played on a single map named Summoner's Rift. Each team is assigned a color (Blue or Red) that designates which side of the map they need to defend. The Blue Side Nexus is located on the bottom left, and the Red Side Nexus is situated on the top right. 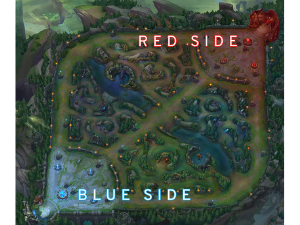 Each of the five players on each team starts the game by choosing a single Champion that they will control for the entirety of the game. Each Champion has a unique set of abilities and playstyles, so teams will pick Champions that work well together. The game is a combination of tactics, teamwork, and individual mechanical skill. 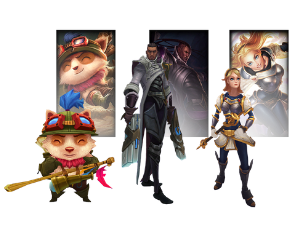 At the beginning of a game, Champions (the player-controlled characters) start with a small amount of gold to buy items. To win a game of League of Legends, players need to strengthen, becoming able to defeat the opposing champions and structures to destroy the Nexus. A player becomes stronger by earning gold to buy progressively stronger items, improving a Champions' durability, abilities, and attacks. Gold is obtained in a few ways, including; killing enemy players and minions, destroying buildings, and defeating neutral monsters. 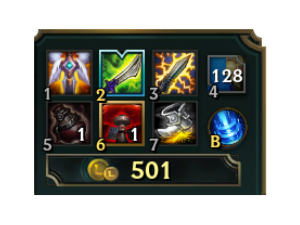 The League of Legends map is broken up into 'lanes'. These are long stretches of the map, which lead to a single entry point to the enemy's base. The three lanes are Top Lane, Middle Lane, and Bottom Lane - each player (except the Jungler) will occupy one of these lanes at the beginning of the game, with two players starting in the Bot Lane. 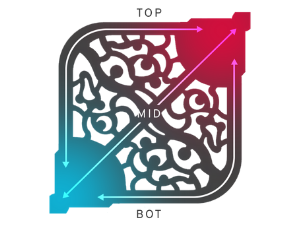 The Top Laner role occupies the Top Lane of the map, this player trends towards picking Champions that are on the durable side or have a way of quickly escaping danger. This is due to the Top Laner being very exposed to enemy ambushes (known as 'ganks') as the lane is long, lacks hiding spots, and has very few escape routes.

The Jungler is the only role that doesn't spend the majority of their time in a lane. Instead, they traditionally occupy their teams' Jungle. They favor high mobility Champions so they can quickly move between lanes assisting their teammates. This role utilizes the Fog to hide their whereabouts so they can ambush the enemies with the element of surprise.

The Mid Laner, like the Top Laner, is the only other role to start the game in a one on one situation. The Mid Laner is positioned in a unique spot of the map, the dead center, so they can quickly move to either side lane, or Jungle, to help out their teammates. Traditionally players in the Mid Lane will pick high damage Champions; this ensures they can kill enemies quickly when they move around the map. The negative to starting in the middle of the map is Mid Laners are exposed to the side lanes and Junglers ambushing them.

Bot Laners primarily occupies the Bottom Lane, along with the Support role. The reason for this is because they favor Champions that are very vulnerable early in the match, but with help from the Support, they become the highest damage dealers in the game.

Supports share the Bottom lane with the Bot Laner. Their purpose is to help the team in any way possible; this includes providing vision around the map, saving players in danger, and helping start fights when they see winning opportunities. They often sacrifice their own life and money to strengthen their teammates.

This guide is a brief overview, however, we have a comprehensive guide to League of Legends that gives a deeper dive on Minions, Buildings, Champions, Lanes, and more! Read Here.